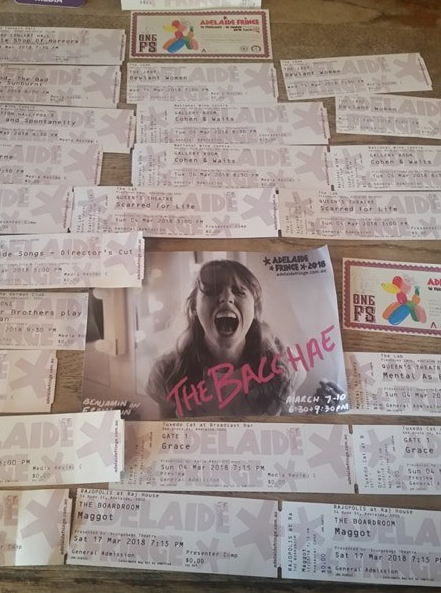 Another year and another Fringe has passed us by. Hundreds of acts, some of which we at Tulpa were lucky enough to go and see. A festival of passionate creatives, wonderful venues, and great celebrations of art – the Fringe is a month in which the arts take over the city. After all of this, the Tulpa team got together to enjoy and share our memories of a remarkable series of arts events.

Reviewing over thirty shows, and going to several more, we at Tulpa were able to enjoy a busy and thrilling few weeks. Recently, in the wash-up from the several weeks of late nights and enjoyable oddities, we decided to discuss what we thought of the famed Mad March.

We nominated our favourite shows of the Fringe. For Taeghan Buggy, it was The Displaced of which ‘the comedic strangeness, attention to space, and skill of the performers was top notch’. For Liam McNally, How to Drink Wine Like a Wanker, a unique performance running a broad and deep range of experiences. Kayla Gaskell recalls her favourite shows as ‘a toss-up between the sexy-circus of Fuego Carnal (which I saw independent of reviewing), the classy cabaret of Anya Anastasia (which will be showcased at the Port Noarlunga Arts Centre in August), and of course, the magical musical theatre production, Little Shop of Horrors.’ Simone Corletto elects The Adelaide Office Live as her own personal favourite show.

The Fringe brings with it a lot of interesting shows that offer unique experiences. Where else would one have the opportunity to stroke would a 17th century man get you to stroke their sword, as was Lisandra Linde’s experience at Deviant Women: Julie d’Aubigny? Or perhaps at The Bacchae, where as Teaghan Buggy recalls, they ‘got all the men to leave the room for the final scene because they “did not have permission to see it”’, to which Taeghan adds, ‘It was so odd because that’s never happened in a play before but it was also a really great moment with the play.’ Simone notes as one of the more remarkable events of the 2018 Adelaide Fringe as when the city got its Seymour Skinner on with North Terrace’s ‘lights installation and basking under the aurora borealis, at this time of year, in this part of the country, located entirely in our museum courtyard’.

A month-long series of remarkable shows and special oddities that very certainly did not disappoint with well over one thousand shows, the Fringe was an event we all got some remarkable experiences from. Shows aplenty, Adelaide utterly transformed into the global arts hub for a city, we looked back on our shared and separate memories with fondness and another eleven months to wait until our city is once again transformed. Taking in a host of comedy, cabaret, theatre, arts installations and other thought-provoking events, the Fringe opened up a wonderful host of local and imported artists to bring their respective stories to Adelaide to share. Where else would you find a velvet-clad Shakespeare, a nun-burning pirate, and The Office come to Adelaide?