The 2010s has been a golden age for reboots of famous film franchises with Men in Black: International, the fourth in the series following this trend. Gone are Will Smith and Tommy Lee Jones as leads, replaced now by Chris Hemsworth and Tessa Thompson. Alongside Hemsworth and Thompson, Liam Neeson and Emma Thompson also star here. With these stars and an already quirky take on aliens this should a recipe for success. However, a quite predictable plot and underusing of some characters does dampen the experience.
Apart from a couple of characters and references, the first three films in the series are almost completely disregarded. This makes this a totally new film, giving it an opportunity to start anew. As the title suggests, this focuses a lot on the international sector of the Men in Black. From London to Marrakesh, this film expands the Men in Black universe and how they operate within it. To see outside of the United States was a breath of fresh air, yet didn’t provide enough substance to the plot.
Of all the actors, Chris Hemsworth is by far the one with the most amount of attention. His character, H, is handsome, yet dim-witted at times. H’s dimwittedness, attractiveness and interesting romantic history are both funny and cringy. He also wears pink pants in here, a sight worth seeing for Hemsworth fans. Some of this humour is aided by M, played by Tessa Thompson. M is nothing in contrast to H; she is attractive and intelligent. The banter between H and M provides some of the funniest moments in the film. It should be noted that Chris Hemsworth’s accent did take away from the experience. He appeared to try sound more British, yet it came out as a hybrid between American and Australian.
As for other characters, Liam Neeson’s character, High T, is by far though the best character in the film. His acting was phenomenal and the way. The aliens who populate the world too are quirky, much like the ones from previous films in the series. Perhaps the one that stands out the most is Pawny, an alien who is part of a chess set. He’s both quirky and loves to take a poke at H.
The acting and characters are sadly dampened by a plot that feels worn out in this era of cinema: trying to save the world. The plot felt way too predictable and unbelievable at times. Some of the almost invincible characters just seemed to be defeated so easily, a factor that did annoy me. There were some moments in the film’s narrative too which I knew the endings to almost immediately. I don’t wish to mention them as I don’t wish to spoil the movie for anyone. Liam Neeson also felt underused. It’s a shame as his character had a lot of great build-up, yet didn’t receive enough screen time. Even just a minute more would have been sufficient.
Men in Black: International is an interesting film. It has a lot of quirky humour and is a major departure from the other films in the series. Chris Hemsworth and Tessa Thompson do a great job and Liam Neeson is phenomenal. However, certain aspects and the predictability of the plot did dampen the experience for me. Saying that though, if you want to see Chris Hemsworth in pink pants and some quirky aliens, check this film out. There is some fun to find here. Men in Black: International is in cinemas now. 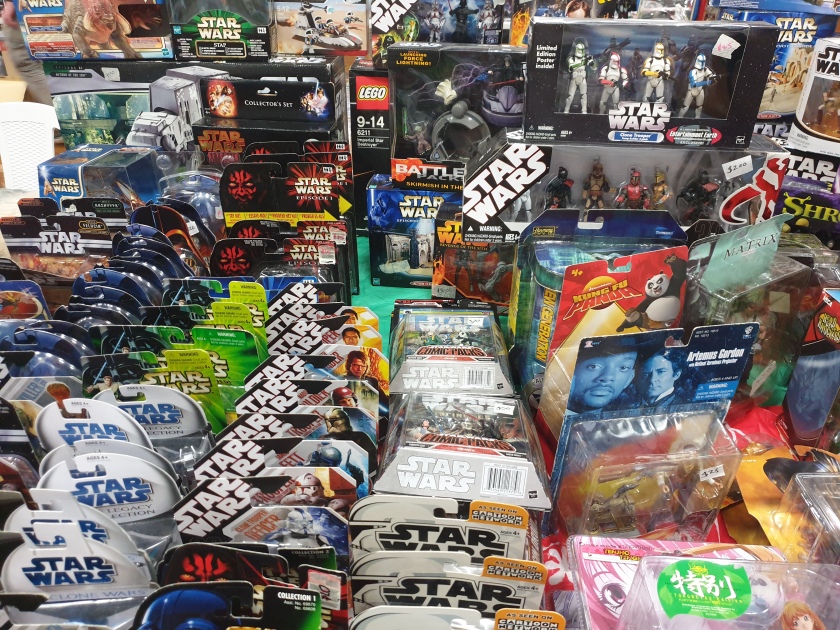 AVCon is a three-day festival that runs during July and signals the end to both the school and uni break. In 2017 it attracted over 20,000 visitors and this year I suspect that record was broken. It is a place where avid lovers of video games, cosplay, pop-culture, and anime come together to share that passion. Run entirely by volunteers, AVCon is an example of a small community coming together in real life as opposed to the forums many visitors undoubtedly frequent to discuss the latest in games, cosplay, and anime.

Walking through AVCon, where-ever you might be, it’s not unusual to hear someone gasp over a cosplayer, artwork, or piece of merchandise they’ve been coveting all year. Adelaide has a lot of amazing talent and, for me, that is where AVCon shines. Not only do we have a strong community surrounding anime and videogames, but we have a range of talented artists with varying art styles who converge to sell their wares and display their skill.

Each year the convention begins with the opening ceremony on the Friday evening—generally characterised by weekend and gold-pass holders gathering in the foyer of the Convention Centre for up to a couple of hours before the doors open. This year was the first year I attended the opening ceremony. We were introduced to the organisers, volunteers, special guests, and the spirit of AVCon with a skit which blurred the lines of dream and reality. The special guests for 2018 included Major Sam, Spike Spencer, Vera Chimera, Neil Kaplan, Beke, and Knitemaya who were all involved in panels across the weekend. The ceremony was followed by a screening of Ready Player One in conjunction with Hybrid World Adelaide.

With Saturday morning came a rush of people flocking in to enjoy the weekend. In the gaming hall there was a mixture of free-play and indie games, as well as some of the weekend’s gaming tournaments (which were also held on the Sunday). In the Exhibitors Hall there was a selection of stalls selling official merchandise as well as stalls promoting Marion and City Libraries, HIDIVE streaming service, and CDW Studios. Beyond the hall was the chaos of Artist Alley. Downstairs you could find panels, special guests, and anime screenings from both HIDIVE and Madman.

With the evening came the ever-popular quiz night with forty-nine tables competing for the prize and privilege of first place. Unfortunately, this year the quiz wasn’t as enjoyable as it has been in previous years with challenging questions and barely anything accessible to your non-gamer. Unfortunately, the winning team disappeared before they could claim their prize and their prize was passed on. I can only hope that next year’s questions will be better and more specific to avoid confusion and that next year’s winners will remain present.

The cosplay competition on Sunday was a wonderful display of talent from local and interstate cosplayers who cosplayed a range of people from games, anime, and pop-culture. Some had spent months on their costumes and others just a few sleepless days. One thing was consistent however, the attention to detail each cosplayer had for their costume, all doing a fantastic job of portraying their chosen character and their personalities. One highlight of the competition was seeing a Xenomorph come onto stage and break out into dance.

#cosplaycompetition at #avcon2018 So many amazing #cosplays and talented #artists about this weekend!

My highlight was, predictably, Artist Alley. I’ve always loved the scattering of stalls, the friendly faces, and familiar fan-art portraying characters I knew and didn’t, as well as those I’d long since forgotten. Artist Alley isn’t just fan art; Decay Comics, indie author Matt J. Pike (whose self-published book series Apocalypse: Diary of a Survivor is set in Adelaide), and Anthony Christou (a full time visual artist) stood out from the crowd by providing their own unique work. Artist Alley had a wide variety of products on offer ranging from prints and badges all the way to socks and scarves printed with original designs.

I’ve always found that AVCon is what you make of it. It is a wonderful place to engage with the gaming, cosplay, Lolita, and anime communities here in Adelaide. It’s also a place to meet new people and form life-long friendships. It offers a sense of belonging for people of all ages and celebrates the talents of video game enthusiasts. Overall I’ve always found it a friendly environment and would recommend getting a friend or two and heading in next year if you can afford it.