Last year we talked to Alicia Carter and Lauren Butterworth, creators of the podcast Deviant Women in the lead up to their knock-out Fringe debut. One year on, and they’re getting ready to bring Deviant Women to the stage again, this time exploring the lives and legends of the infamous female pirate duo Anne Bonny and Mary Read.

On the opening night of Fringe 2019, Tulpa’s Lisandra Linde caught up with Alicia and Lauren to talk about the experience of bringing Deviant Women to the stage and their upcoming show Pirate Ladies Give No F*cks.

Last year you did two different stage shows – Julie D’Aubigny and Madame Blavatsky – how did that go?

Alicia: Yeah, definitely. We did two entirely different shows about a week and a half apart. For the first show [Julie D’Aubigny] we were going in blind. We didn’t have any idea what it was going to be like and we were really amazed that within the first five minutes of the show the audience was responding, like, audibly.

Lauren: I remember a moment a few minutes into the show where we could see the front row really well and their faces were just very smiley and there were these big body laughs and I was just like – ‘oh wow, this is going well’.

Lauren: We fed off their energy and I think they fed off of our energy, so by the end of the night we came off the stage and we were totally on another planet.

Alicia: And then, of course, we were worried about whether or not the second show would live up to the standards of the first show.

Lauren: Especially because we’d had less time to rehearse the second show because we’d been concentrating so much of our efforts on the first show.

Alicia: Also, with the success of the first show, we got some pretty great reviews, a lot of word-of-mouth, so the second show sold out.

Lauren: Because [Blavatsky] was such a different show – well I guess the tone was similar but – the tone of the humour was very similar but the theme of the shows were really opposite, so we weren’t sure if what worked in D’Aubigny would work in Blavatsky. D’Aubigny was so colourful and bright and energetic and quite sexy and tongue-in-cheek, whereas Blavatsky was more spooky.

Alicia: But no, it ended up being just as much of a success as the first show and, again, we got some excellent reviews – five-star reviews – and yeah, really good feedback. I think that when we say surprisingly well, it’s not because we expected them to be a flop but it’s just that they did a lot better than we’d hoped. 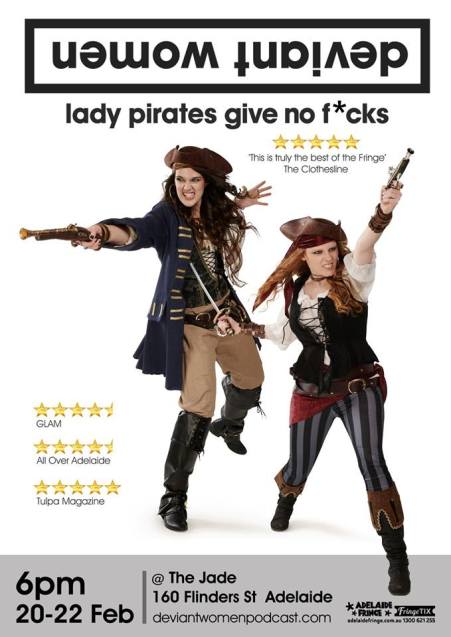 You’re back again this year with a show about Anne Bonny and Mary Read called Pirate Ladies Give No F*cks. You’ve talked about both these swashbuckling ladies in your podcast in the past – what was it that made you choose to do a stage show about them?

Lauren: The thing that we learned from the last Fringe was that while we had an amazing time doing two different shows, there’s a reason why theatrical groups tend to do a show multiple times. Not two shows once each. We just wrecked ourselves doing that, so this time we wanted to do a show that had two primary characters. We didn’t just want one of us to be the main figure, and the other one of us to be the side characters like we did in the last shows. We wanted to choose a pair of women. We actually looked at a few different pairs of women from history but, to be honest, and I think that this is saying something, there weren’t that many stories that we came across of female duos. There are a lot of male duos, and every time you did find a female duo they were either just celebrity pairings or they were frenemies. You know, like the Joan Crawford and Betty Davis sort of frenemies. And we just really wanted to tell a story about female friendship as well, because that’s something that I think is really quite underrepresented.

Alicia: If you look up something like ‘best male duos’ there’s so many from history that you can find that were real men. Whereas with women, the majority of the results that we get are of fictional characters like Thelma and Louise. It wasn’t that we couldn’t find other examples, because we did find a few, but the information that was available to us about a lot of these other female duos was very limited. With Anne and Mary, where we’re lucky that we do have so much about their lives, that’s actually really quite uncommon. We loved their story as well, and we are both big fans of pirates. We like the aesthetic of being a pirate, so it didn’t take us long to decide that it was probably going to be a lot of fun and it was also going to be a lot of material that we could use.

Lauren: A lot of their exploits are quite outrageous. Their story is one that could be turned into a really fun romp, you know? It’s also a story that shows the various shades of these women as well. They’re not just pirates who were fighting alongside men on ships. They were best friends, they were potentially lovers, they had romances, they had heartbreak… They were so amazing in so many ways, but they are also full of contradictions and full of things that make people interesting. I think a big part of the Deviant Women project is trying to think of women as being three-dimensional creatures who are full of shades of light and dark – dare I say, human?

Alicia: I think that’s a part of the podcast as well as the stage show. A lot of what we do is celebrating women from history. Sometimes we think of celebrating in terms of uncovering and finding them and knowing that they exist. It doesn’t necessarily mean we’re celebrating them because we’re holding them up as paragons of being amazingly wonderful people. Like, a lot of these women were quite bad people.

Alicia: It’s about finding that area where you don’t have to be a wonderful person in order for us to celebrate your existence.

Lauren: And these two women are really good examples of that.

Your shows mix a lot of elements, from sketch comedy to animation and even audience participation. How much work goes into creating a show with this much stuff going on?

Alicia: Actually, we’ve added a new element to this [year’s] show. We’ve branched out into the world of musicals.

Lauren: Song and dance numbers are now making their debut on the Deviant Women stage.

Alicia: We didn’t think we had enough crammed into the shows last year. So this time we thought we’d do a bit of a musical number.

Lauren: We were also really lucky this year to have another couple of artists approach us and want to get involved in the show as well so we’ve got two designers and animators who have come onboard to help us out with some of our visuals and animations this year – Levi George and Lisa Vertudaches – we’ve been able to work with them which has been really fun.

Alicia: They’ve been very generous with their time and they’ve given us some really awesome animations that we’ve thrown into the mix with some of our own crap animations.

Lauren: Of course, we couldn’t not try our hand at animation. A different form this time. So last year we had stop-motion claymation and shadow puppets. There’s a new one in the mix this year.

You obviously do a lot of historical research for every show (and podcast). How do you find the balance between the information you want to share about these women and the more comedic elements of the show?

Lauren: Okay, so this story, as with our two previous stories (D’Aubigny and Blavatsky), had historical facts about them that were verifiable in the historical record, but they were also both surrounded in myth and legend as well. I think it’s that space [between fact and myth] that allows us that creativity and a chance to play and have fun with their stories. We’re very upfront about the fact that A, B, and C is historical fact, and D and E are apocryphal stories. I think we’re both really interested in not simply the historical figures, but we’re interested in storytelling. We’re interested in the ways that stories about women are told, and the way that historical figures become mythologised.

Alicia: When we find gaps in the narrative, or we find interactions with other people that have been merely suggested or hinted at, it’s taking those other characters around them as well and then creating something out of it. So one of them might have a dalliance with a lover or something, and that’s about as much as you get. And that gives you so much freedom to make anything you like out of that lover because there’s nothing in the history books to tell you about them. We kind of create these characters that would have been around them as well.

Lauren: And those characters often become symbols for the feminist undercurrent of the show. Quite often we’re lampooning particular stereotypes. Particularly around things like toxic masculinity or sexual politics.

What’s your favourite part of bringing these shows to life? And what do you look forward to most in doing the show this year?

Alicia: I’m looking forward to it being over so that we can sleep [laughs]. No, my favourite part of the show is bringing to life the visual aspects. I love it when we get stuck into the costuming and the sets. What I like is the idea that you come along to the show and hopefully we can transport you to a different time. I really enjoy putting together those visual cues.

Lauren: I kind just live for that moment on stage. Performing transports you to a totally different dimension, you know? I’m a totally different person on stage than I am in face-to-face conversation. I’m really in love with the Lauren that comes out when she’s on stage. I wish she would come out more in everyday life because she is very confident, she’s very playful and she’s very over-the-top. I really love being her. Having the chance to really lean into the performing and feeding off of the energy of people, kind of getting that sense that you’re sharing an experience with people through this thing that you’re doing. That’s just such an enormous high, and I really love it.

Alicia: That’s why we came back and decided to do it again this year. That’s the thing about live performance in general, isn’t it? That you create something there in the moment that’s very ephemeral but that everyone in the room is sharing. So I think that’s what keeps us going.

Deviant Women will be performing at the Adelaide Fringe on the 20th, 21st and 22nd of February. You can grab your tickets here. You can learn more about Deviant Women and their podcast on their website, or listen on iTunes. You can find them on Facebook, Twitter and Instagram.

Tulpa thanks Deviant Women creators Alicia Carter and Lauren Butterworth for taking the time to speak with us. Interview conducted and transcribed by Lisandra Linde.