Melissa wasn’t like the girls I’d met at uni. She wasn’t like the girls from home, either, who drove tractors round their parents’ farms and got pissed on Bundy after Saturday netball. There was something faint and ungraspable about her, like a mirage or a shadow. But one that wears Doc Martens.

One night I got home and found her in my room. She was in her nightie, rifling through my wardrobe. I stood in the doorway, gobsmacked. She didn’t flinch, just smiled and asked me if all arts students dressed like povvo tryhards.

She floated past me and I noticed she was wearing my purple lipstick. I felt weird about it but I’d only just moved in so I was too awkward to say anything.

Housemate Wanted, the sign had said. $50 a week. Parkside. Girls Only. The phone number was a landline, and when I called, her accent sounded kind of posh but she had this laugh that was totally contagious. I went to see the place and it was heaps better than the student accommodation Mum and Dad had been shelling out for. A bungalow with a fern garden on a street lined with jacarandas. Real close to town, as well. No air con, but.

‘Do you have Internet?’ I asked.

Melissa snorted and said no of course not, did she look like a yuppie? I didn’t really know what to say but she dressed so cool, like Courtney Love in her prime but without the druggie vibes, and I reckoned Allison and Janie from Drawing would be really impressed by her so I kind of was too. I moved my stuff in that day and me and Melissa drank red wine in a hammock out the back and she smoked cigarettes while the sun set.

The next week I lost a necklace. A gold coin on a chain. It wasn’t worth anything but I was pissed off because Zach from Film Studies had said he thought it was cool and I was really keen on him. He had big brown eyes and worked out at the gym on campus. I thought maybe Melissa had borrowed it so I knocked on her door but she wasn’t there. It was weird, you know, I never saw her go out, she just wasn’t there sometimes. I wouldn’t have gone in, but her door just kind of swung open. It’s funny what you’ll do when no one’s there to watch you.

Her room had this chemical smell about it, clean but kind of noxious. I didn’t switch on the light because it wasn’t quite dark and there was a bit of glowy sunset coming in the window. The floorboards creaked under my feet.

I had a look on her dressing table, but couldn’t see my necklace. She had scarves strung around the place like cobwebs and cassette tapes spilled from plastic cases. Who plays tapes anymore, lol?

Ammonia, that’s what the smell was. She must have bleached her roots, which were dark as oil. One of her satin nighties was slung over the back of a chair and for whatever reason I put it on over my t-shirt and jeans. In the mirror, in the half-light, I looked almost like her.

I heard the magpies gabbling away outside but then all at once everything went quiet. I had this strange feeling like someone was right behind me.

Then something moved. I realised Melissa was on the bed, had been there the whole time. Maybe asleep under the sheets. I didn’t wait to find out, I just bolted back to my room and shut the door.

After our tute one day Zach asked me out and I said yes. Melissa wanted to meet him so he came round for a beer before we went to the Unibar, but I quickly realised this was a mistake. Once I saw him looking at her, I noticed how long her eyelashes were and how the choker she wore drew attention to her naked collarbones. When she laughed it was like a shower of diamonds falling on you. I felt like the yobbo girl from the country. I sipped my beer quietly.

But Melissa just smiled and cracked another Coopers.

I said no and he asked if I wanted to. I didn’t but I didn’t want to say that so instead I asked him what he thought about the silent movie we saw last week for class. The one with the eyeball and the scalpel. Then I suppose I forgot about feeling jealous because we watched the shitty punk band and drank more beer and when he slipped his tongue in my mouth it tasted like Extra peppermint chewies and I got this like bolt of lightning in my you-know-where, and we ended up doing it in the bathroom under the fluoro. His dick was massive, which seemed weird cos he was kind of short. But anyway, while we were, you know, I tried to focus on his awesome pecs but I kept thinking of Melissa spreading my lipstick on her lips and it didn’t put me off, it was kind of a turn on actually, which is weird because I’m not a lezzo or anything. At least, I never was before.

Anyway, when I got home I was still pretty drunk but not that drunk I didn’t think. I was trying to be really quiet. I got myself a glass of water from the tap and I was sculling it when there was that bleach smell again. The moonlight was coming in through the skylight and I know it was hard to see but I swear to God, right before my eyes she just appeared. Like out of nothing. Like there was just empty space and then she faded in and flickered a bit, kind of like a David Lynch movie, and then she was there in front of me.

I pretty much shit myself but she just raised her eyebrows as if to say what are you looking at? and then she turned and walked back to her room.

That was around the time I stopped sleeping.

Things get a bit hazy after that.

I kept going to classes for a while, but I got really strung out from lying awake all night.

‘Come on, let’s put on the Pixies and drink chardonnay,’ she’d say. And we would, and eventually I’d pass out but then I’d bolt awake and she’d be there lying next to me, real close and looking at me while I slept. Her eyes big and dark, ammonia fumes spewing from her mouth.

They tell me it was April, mid-semester break, so a month after the date with Zach, when I finally charged my phone and went online. Scrolling through, I saw Zach was going out with Janie, skinny bitch. A photo of them both looking pretty wasted showed him grabbing her tit while her mouth leered, a red slash across her face rendered in pixels that I couldn’t stop staring at.

My message box was chockers with people asking where I was, but I thought it must have been a spam bot because I didn’t feel like that much time had passed. That was when I realised she was keeping me in the house somehow. Holding onto me. Melissa flickered into the room. I felt my insides go cold. Before she could get to me I typed in a quick status update and hit ‘share’. That feeling when you realise your housemate is a ghost. Then my phone went dead.

A few people freaked out apparently, cos I’d been AWOL for a few weeks and it must have seemed like a bit of a cracked up thing to say. Mum drove all the way down from Balaklava and found me in my pyjamas, starving and delirious, in a house full of old shit that was covered in dust.

Later on, after I moved out, I spent an afternoon in the musty book stacks in the Barr Smith Library with my laptop, digging through The Advertiser’s archive. Eventually I found it: an article with the headline, ‘Blonde Suicides by Poison in Inner Suburbs.’

Melissa Mahoney (19) was found last Saturday at her home in Parkside, deceased. Police are treating the death as a suicide. Detective Sergeant Robert Briggs told reporters that the young journalism student appeared to have consumed a large quantity of household bleach and the coroner’s report named poisoning as the cause of death.

It is not believed that the deceased left a note, but students at Adelaide University told reporters that Miss Mahoney had recently advertised for a housemate via a photocopied poster.

The Student Association held a candlelight vigil on Sunday and have started a petition to have the poster commemorated and for it to remain on the university notice board indefinitely.

Miss Mahoney is remembered by her mother, Amanda Mahoney (41) who resides in Massachusetts in the United States, and who is also the owner of the residence in Parkside. Mrs. Mahoney has no plans to return to Adelaide. 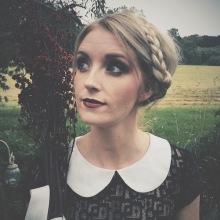 Emma is co-founder of The Hearth Collective, a group of rad literary babes who host regular events in Adelaide to support emerging writers and artists. In addition to publishing work in several academic journals, she has also written for Kill Your Darlings, Feminartsy and Empire Times.