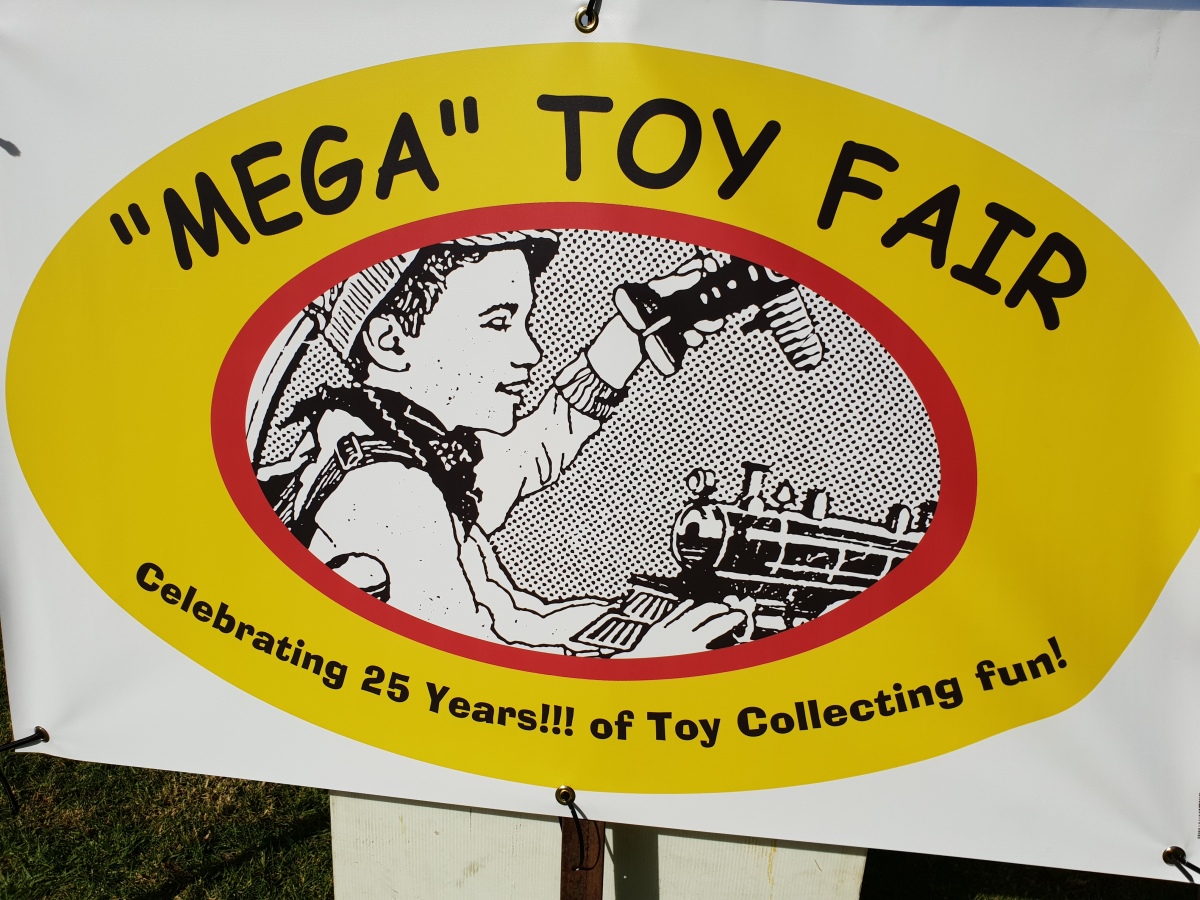 The Adelaide Mega Toy Fair is the largest annual market for toys and collectables in Australia. This year’s event was held over the first weekend of June (June 2nd-3rd) at the Stirling Angas Hall in the Adelaide Showgrounds and marks 25 years since it began. I have been wanting to visit the Mega Toy Fair for years, but due to other commitments I never had time, this year I finally had the chance to visit. What I came out with was a thrilling, worthwhile experience that, without self-control, could have easily drained my bank account.

I arrived at the Mega Toy Fair right on opening time (10am) Saturday morning to a massive line up. The picture below shows me from the end of the line, near the Kidman Entrance gates. Seeing the line-up, I knew this was going to be an interesting event. The line eventually died down, much to the relief of anyone arriving later on.

After paying the $7 entrance fee (I got concession, $8 for regular adult) I felt as though I had fallen down a hole into another dimension. The event was gigantic! Hundreds, possibly even, over a thousand stalls were before me. It was a collector’s paradise of things old and new; from pre-World War Two Hornby clockwork trains and a $35 statue of K-9 from Doctor Who to endless rows of Hot Wheels cars and a OO (1:76) scale model of The Flying Scotsman steam locomotive.

My inner nerd went into overdrive browsing all of these tables, especially when I found the video games. At one table, I found a loose cartridge of Secret of Mana selling for $75 and a boxed copy of Mystic Quest Legend (Final Fantasy Mystic Quest in the US/Japan) for $100. While I did not buy these, I thought they were reasonably priced, as compared to game stores and eBay, which could have easily been double the price. One of my other encounters was discovering a copy of Harvest Moon on the SNES, a game that is rare in Australia. However, I suspected it to be a reproduction cartridge as it appeared too new and the cartridge art seemed off.

The Mega Toy Fair was a pop culture lover’s dream come true. I found Star Wars toys from the seventies and eighties on a vast majority of tables and a boxed Robot figurine from the original Lost in Space. To me, there were three things that really caught my interest out of this pop culture goodness. One was a Laserdisc copy of Star Wars: A New Hope. I did not ask for the price, but I found it to be a very unique piece and I would have bought it if I had a Laserdisc player. Another stand out piece was a collection of Star Trek: The Original Series figurines at the Starship Mawson stand. They were imported from the US and selling for $300, a price too steep for me at this moment. Although they were expensive, I found them to be beautifully crafted and would have gone well in my pop culture collection. The third was an Edgar Allan Poe bobblehead selling for $40. It is one of the things I eventually caved and bought. 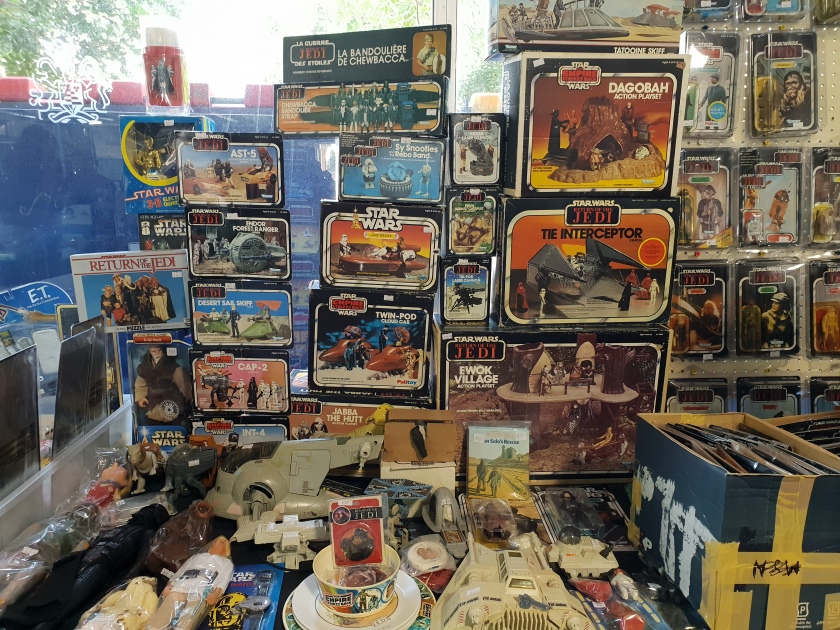 Overall, I really enjoyed the Mega Toy Fair. It was well worth the trip through to the other dimension, where pop culture and my childhood took over. I will certainly be going back to it next year. I can only hope I have more money on me and more space available to use up at home.

Words and photography by Cameron Lowe 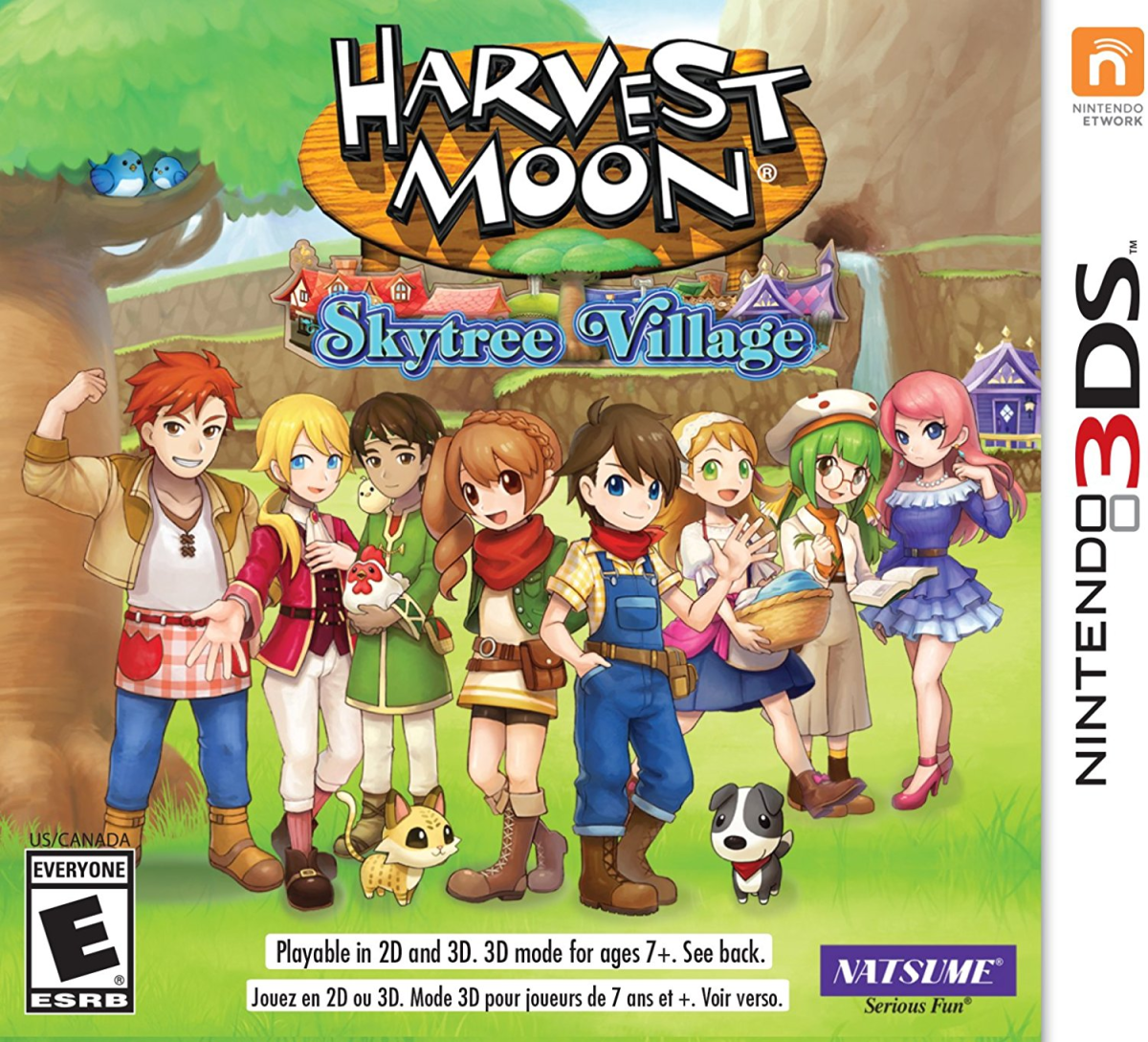 So I think we can all agree that 2017 was a trash fire of a year. And while I’m cautiously optimistic that 2018 will be better, just in case, it’s good to have something to combat all the possible stress that this brand new year could unexpectedly unleash.

And there’s nothing quite as good to destress (that’s legally available) than virtual farming.

Harvest Moon is one of those classic video game series, like Mario or Zelda, with editions for most consoles, stretching back from Harvest Moon (1996) on the SNES, with following titles on the N64, Gamecube, the Wii, WiiU, on each Gameboy/DS/3DS handheld console, and the Switch. But far from being a Nintendo exclusive, you can also find these games made for the Playstation 1, 2, 3, the PSP and Vita. Last year Natsume even released games for Windows (available through the Steam store) and on Android. I can think of few other series with as wide a market reach. And all this for a simple farming game.

Keep in mind this list also includes the spinoff series (Rune Factory – which added dungeon crawling and fighting monsters to the usual farming gameplay) and the split which saw the North American distribution taken over by XSeed and create their own rival series, Story of Seasons. But as this was originally all once a part of the Harvest Moon brand, I’ll be including them in this discussion.

But what makes Harvest Moon such a successful franchise? Why have there been so many copycat games, most notably the thrillingly successful Stardew Valley (now even available on the Switch! Not bad for an indie title)? Why is a game with no combat, little customisation and no online multiplayer continually selling well enough to keep the franchise going for over twenty years? As someone who has played almost all of these games I think it comes down to a few factors.

Firstly, there’s something about simulation games that you don’t get in other genres. Here you are the master of your world. While you’re not quite playing God as you are in The Sims, Harvest Moon gives you a plot of land and says go at it. You are able to craft the farm of your dreams, cultivating whatever crops you desire, raising cows and sheep and chickens and (sometimes) pigs and goats and llamas, or not. You could also skip the farming all together and make your money from foraging in the local forest for berries and acorns, or become a professional fisherman, or miner. Or all of the above. The choice is yours.

In addition to farming, you’re expected to integrate into the local village community, court one lucky bachelor or bachelorette (depending on the game. Unfortunately same-sex couples are not an option, although you CAN have a “friendship ceremony” with a same-sex villager in Harvest Moon DS and Harvest Moon DS Cute), get married and (usually) have a child. Each game comes with a choice from about 5 (or 10) eligible young people each with their own backstory, personality and lists of likes and dislikes. Some games even feature romantic rivals, who will move in if you’re not fast enough, so get cracking on that daily gift-giving. Each romance option comes with a list of milestones and cutscene events which are the closest thing to an actual story plot in most of these games, and all lead up to the big moment where you can propose with a blue feather (the game’s version of an engagement ring). It’s usually possible to romance more than one person to get as many cutscenes as possible, but usually you need to pick just one guy or girl by the end. Just don’t expect any explicit reward at the end. This game is exceedingly PG and child-friendly. Even the process of becoming pregnant and having a kid is vague and random. And your new virtual family won’t necessarily help you with your farm and your child may never grow up (in most games anyway), which can be a bit existentially concerning, but it’s the milestone at which you could consider the game finished, because,

You can farm forever.

In almost all the games, there is no real END. You just play until you get bored and move on. For me this usually happens after the second year or so, once I’ve married my beau and fulfilled whatever other story plot requirements there may be – most recently I’ve been playing Harvest Moon Skytree Village, and only now do I get to properly court my masculine red-headed flower shop man. Forcing the bulk of the romance into post-story content is a devious trick to extend the playability of this game, but there’s also enough new collectables unlocked to keep you busy.

If you’re a completionist, you will either love or hate these games. There are long lists of crops, animals, animal products, forgeable items, fish and more to collect in each game, as well as lists of villagers met, building upgrades, and – my favourite – recipes. Cooking in this game is usually only available once you upgrade your house to build a kitchen and/or buy some kitchen utensils, and can be a great way to increase the value of your produce (ie, boiled egg can be shipped for more G than raw eggs), as well as creating dishes which can be given to villagers as gifts or entered into the cooking festival. For the games that list a pokedex-like recipe book, I’ve literally created spreadsheets based of the lists available in the Wiki’s to systematically unlock each recipe – because I’m the kind of person who likes lists and spreadsheets – and yes it’s very satisfying to tick off every soup and salad and main and dessert and flick between your completed lists. It’s way more exciting than actual cooking.

In summary, these games are the ultimate de-stress, zone-out anthesis to your busy life. Every aspect of life has been simplified and shrunk down into a series of simple repetitive tasks, in a world where pregnancy happens by throwing sparkles over a female cow, you can till an entire 3”x3” square with a big enough swing, and spamming the local library girl with pink flowers every day will eventually lead to your wedding day despite the almost entirely one-sided conversation. It’s a world where there are only 30 days to a season, 4 seasons to a year, and people get “drunk” off grape juice at the local tavern. There’s always a goddess living in a lake, a series of tiny sprites you can recruit to do your chores, and summer will always bring a hurricane or two which will drop rocks on your fields and kill your crops. Every game is essentially the same framework in a different skin and trimmings, but there’s something oddly comforting – and addicting – in that reliability.

Simone Corletto is an Adelaide-based YA and Science-Fiction writer. She’s performed her work numerous times for Speakeasy and at the National Young Writers Festival. Her first co-edited anthology, Crush, was published by MidnightSun Publishing this year. Her work has also appeared in Empire Times, Double Helix, RiAus, and the 2017 Visible Ink anthology “The End”. She spends her spare time crocheting lumpy hats, writing about teenage superheroes, and telling people about her science degree. She tweets at @SimCorWrites