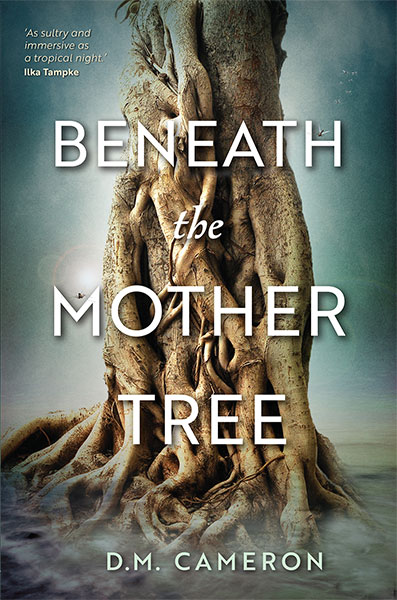 The island is unsettled and Ayla’s Grappa thinks the mythological Irish figure of Far Dorocha is to blame. Mosquito specialist Marise has moved her only son Riley to the secluded island after the death of her husband and his stepfather. Their arrival sends ripples through the place’s normally serene ecosystem, and adds pressure to their already fraught relationship. Ayla, lost in her own way, and Riley form a connection, which is in turn strange and familiar. D.M Cameron’s debut novel, through Midnight Sun, is a dark narrative of love, belief, and twisted family ties.

For the most part this is a narrative about strangers in a small town. Marise and Riley are interlopers to a close-knit community, and Marise in particular struggles to acclimatise to their new life. She is drawn there by a house on the edge of a marsh heavily populated by mosquitos. For Riley, this is the first chance at a ‘normal’ life – his mother is a restricting and at times abusive woman and he was not allowed to go to school or foster relationships with outsiders. When hit with the double blow of Ayla and Riley’s deepening relationship and the local council’s decision to spray Marise’s precious marsh in order to control the insect population, she is forced to use some truly dark techniques to get what she wants.

Irish mythology plays a heavy part in the events of the novel. Grappa, in an almost childish way, believes in the spirits and creatures in the stories he tells Ayla. Ayla too, see-saws on the truth of her grandfather’s stories. When the bad things begin happening on the island – animals behaving strangely, the death of beloved pets through a deadly virus cultivated by Marise in her research – Grappa is convinced the evil Far Dorocha is at work through the scientist. Indeed, Cameron creates an almost magic-realist landscape for her characters – there are many scenes where Marise dreams she is transformed into a cloud of mosquitos, only to wake and find the pet of the islander she’s been having is dead; the titular Mother Tree seems to cast a protective shelter around Ayla.

Along with the Irish mythology, Cameron tries to include some Indigenous history and culture. For me, this was of the book’s biggest problem. Cameron’s fictional island, like most of Australia, contains a deeply colonial history and the site of a mass murder of Indigenous peoples is a reoccurring image and theme. However, this examination of Australia’s colonial violence feels heavy-handed and uneven as the novel only has two Indigenous characters – a teenage girl who studies on the mainland and has no narrative weight, and a wise-woman who also carries no real narrative importance. Given the importance placed on the Aboriginal mythology, it would have been beneficial to have an Indigenous voice to weigh in on the events of the novel. Instead, the weight of this piece of the island’s violent history is mostly carried by Ayla – a white character. Ayla spends much of the novel coming to terms with the massacre but given the lack of Indigenous voice I wasn’t sure what Cameron was trying to achieve with its inclusion.

The character of Marise was one of the novel’s short-comings for me. As the novel’s primary antagonist, she is a ruthless and possessive woman, who will do anything to get what she wants. However, her portrayal at times felt a little too cartoon villain-like. There was a lack of clarity in her machinations that made it hard to understand or empathise with her. Often the menace of an antagonist comes from their internal logic, twisted though it may be, and Marise’s internal logic was a little too murky.

However, Beneath the Mother Tree is also home to some moments of genuine sweetness. The sweetly awkward budding relationship between Ayla and Riley was a treat to read. The same could be said of the relationship between Grappa and his granddaughter. Ayla has a deep love of the Irish folklore and it shapes her entire character. Cameron also managed to capture the insidious, insular nature of small towns with some skill.