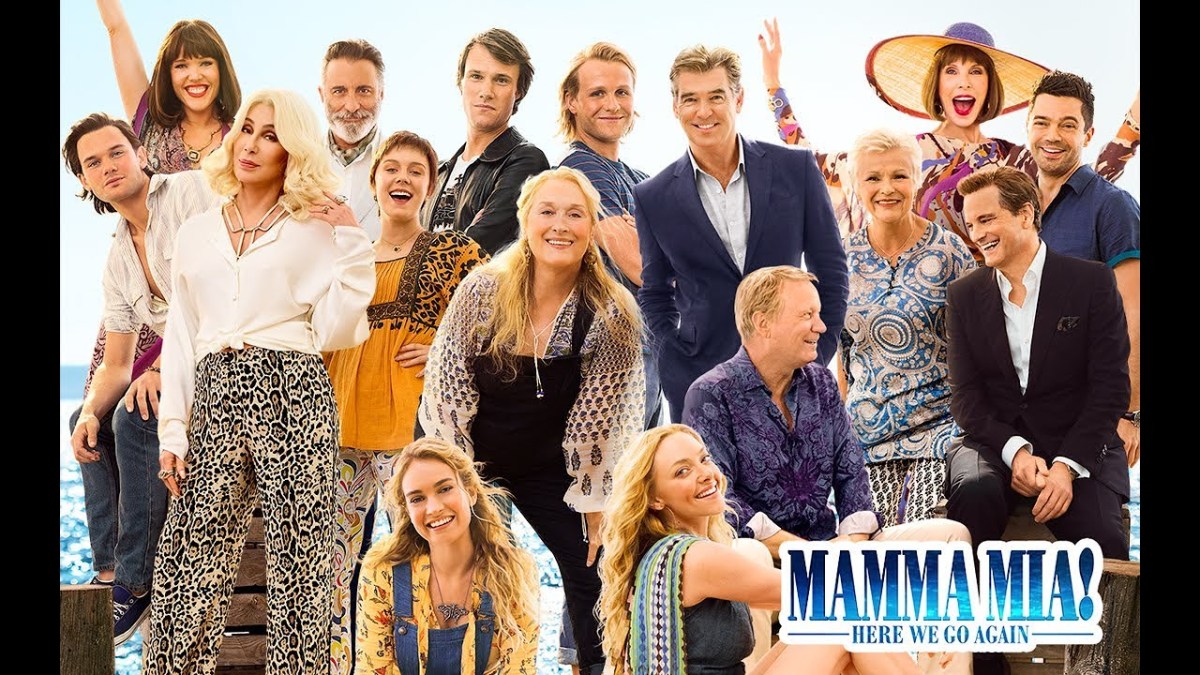 After watching the original Mamma Mia, we were left feeling jolly and warm. Not only was I feeling jolly after Mamma Mia! Here We Go Again, but I felt as if I had been filled to the brim with sunshine. Our good friend Ol Parker, director of both Mamma Mia extravaganzas, did the job, and did it well.

Our narrative picks up where we left off on the idyllic, fantasy Greek island of Kalokairi (yes I legitimately thought it was a real place too) – boy, is it good to be back! This time, in a 110-minute feature, viewers are gifted with both a prequel and a sequel in one – the holes in the past are filled, and the future is unravelling before our eyes. To the dismay of many, the character of Donna – Meryl Streep’s original role as the much loved, overall-wearing, ‘dancing queen’ – had passed on. Instead, we see Sophie, Donna’s daughter played by Amanda Seyfried, battle with the grief of losing her mother. Paralleling the events of the present, we see flashbacks to the late 1970s where a youthful Donna, portrayed by Lily James, lives out the events which lead to the ‘three-possible-dads’ scenario – Donna falls pregnant, but the father is unknown. Along the journey, you will see the downright awkwardness of young love, the allure of summer romances, and the enteral love that is found in a soul-mate (of the romantic, platonic, and filarial kind).

James had big boots to fill. Not only was she climbing into the character of Donna Sheridan, one of the most loved female protagonists in musical theatre history, but she was to be completing the backstory of a character once played by the queen of the craft herself: Meryl Streep. James’ ability to combine effortless charm with an attractive serenity, while including a side of youthful excitement, made for an endearing portrayal of young Donna. Her performance was the perfect complement to Steep’s work in the first film. You can’t help but fall in love with her character.

As the film rolls on, all the fan favourites come into focus and take us on a trip down memory lane – we loved the characters once, and we were more than ready to love them again. Pierce Brosnan, Stellan Skarsgård, and Colin Firth return to the screen as Sam, Bill, and Harry, respectively, and are still in tip-top shape as they bumble about and bring interesting vocal qualities to the film. There is a continuity in the casting that is satisfying and appealing. We also get to know Harry, Sam and Bill in their youth; this casting was a spectacular feat. Jeremy Irvine, Josh Dylan, and Hugh Skinner took our collective breath away as our three dashing dudes: their performances effectively realised the imagined pasts of the leading men. And we cannot forget Julie Walters and Christine Baranski, who return as Rosie and Tanya, Donna’s greatest friends – Walters and Baranki’s performances have not withered with time. As fabulous in their old age as they were in their youth, these characters bring additional layers of sensitivity, sass, and sexiness to the smorgasbord of extraordinary personalities.

With every flare, platform shoe, and atrociously patterned outfit, the dance moves get better and better. They are groovy and visually appealing. They capture the past as well as the present, and appear to allow for the actors to genuinely enjoy their work. I speak specifically of the free-style dancing from Brosnan, Skarsgård and Firth, which generated laughs from every corner of the theatre. In case you were wondering, the soundtrack is available on all streaming platforms (I’ve checked and downloaded). Aside from a few classics – ‘Mamma Mia’ and ‘Dancing Queen’ included – the soundtrack is fresh, and the songs fit seamlessly amidst the storyline – credit must be given to the writers, Catherine Johnson, Richard Curtis, and Ol Parker.

This film finishes in a way that is uniquely Mamma Mia. The ensemble, dressed in ABBA themed costumes, crank out ‘Super-Trooper’ and viewers see the cast, half themselves and half in character, genuinely having the time of their lives. Old versions of characters are dancing with young versions of themselves, Cher is shuffling along in pumps, and even Streep is there joining in on the fun (just a warning, get the tissues out for her return…I sobbed a little).

And to finish, beneath the ‘Waterloo’s and ‘Fernando’s, there is something empowering within this film. We see a young woman travel solo across the world to ‘make memories’ (a concept that still has fear surrounding it today). We see this same woman engage in relationships and catch feelings in ways that are familiar, but are not always accepted. We see this woman keep friendships (and female friendships at that) which last a lifetime. And finally, we see her raise a child, successfully, on her own. All the while we get an ABBA soundtrack as background music for this narrative (what a win).

The way I see it, this film wasn’t produced for critics, and it doesn’t demand to be showered with awards and accolades. It was made for the regular people out there who, amongst their busy and stressful lives, deserve to go and see a film that makes them want to groove their socks off.

Also, a penny for the thoughts of some Adelaide viewers:

‘We thought it was a lot more slick than the first movie. The choreography was polished, and the songs fit the storyline perfectly.’ – Rachael

‘It was so spectacular and so pure!’ – Andrew

‘It’s rare that a sequel is just as joyful and full of excitement and soul as the original!’ – Christina