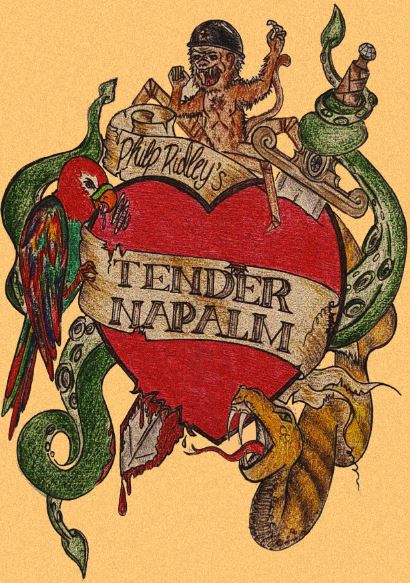 From the very opening, Tender Napalm twists like a bite to the lips. Within this play, both beauty and brutality lie close to one another. Love and hate, violence and tenderness, are the shared blade of a doubled-edged knife.
The players of Tender Napalm are an unnamed man and woman, played by Mark Healy and Carol Lawton respectively. Outside of the immediate narrative, much of the backdrop of the relationship history of these characters is left unspoken. Instead, it simmers under the surface tension of the push-and-pull of their power dynamics. The aftermath of tragedy lies underfoot as love, sexual desire, and violence play out between the characters. Their histories are gestured at but largely remain unspoken; even at the end, you do not know the precise details of what has happened to them. Healy and Lawton carry this tension in an incredibly dynamic, believable performance. There is a real feeling of deep connection between them, both of love and resentment. Their chemistry is such that, at times, the audience is like an eye through a keyhole; transgressively voyeuristic.
The tension of this play is masterfully maintained; the interplay of love and violence depicted is adversarial and uplifting at turns – but never boring. Just when the characters seem to have plumbed the depths of animosity, something softens. Similarly, tenderness is turned to confrontation in moments. Raw emotion is tempered with biting humour. 80 minutes goes swiftly. There is a tangible sense that Healy and Lawton sunk their teeth into the meat of their roles, and it is a delight to watch. Lawton brings a pleasingly vicious delight to moments of savagery that have men in the audience crossing their legs. Healy especially impresses; the honesty of his acting during some of the play’s quieter and more emotional moments is riveting to behold.
At times Tender Napalm is uncomfortably, unflinchingly vivid, in others it is tenderly, poetically beautiful, but it is gripping in all moments. The play closes the way it opened, on a man and a woman in a quiet embrace. This is what it means love, to hold, to hate; “a bullet between the lips… without breaking a single tooth”.

Tender Napalm runs from the 19th to the 29th of June at Holden Street Theatres. Tickets and times can be found here. 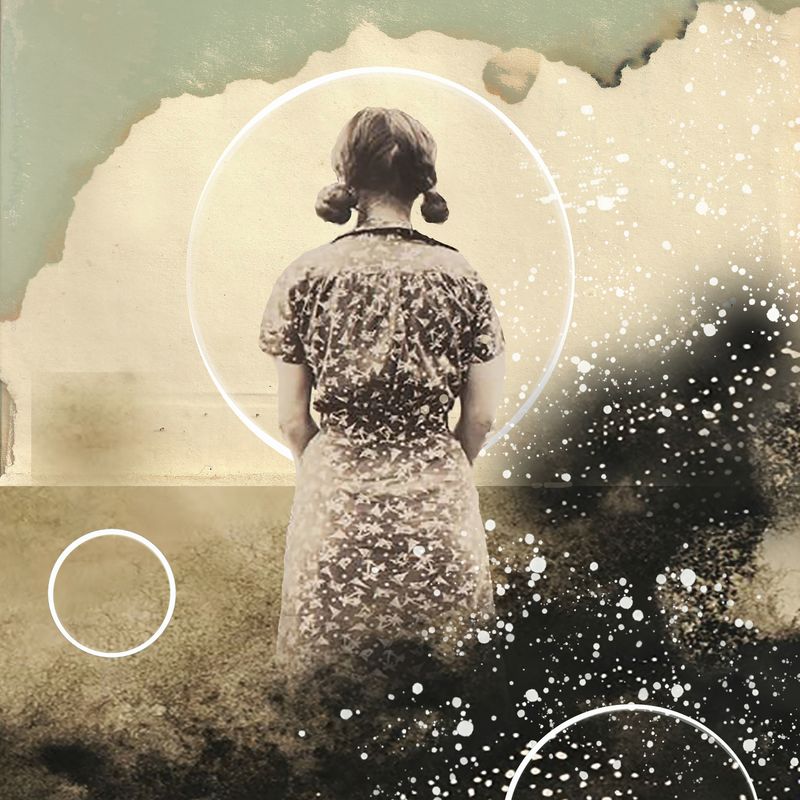 The Archive of Educated Hearts is an exquisitely touching piece of work. This theatre and installation act is tucked away in one of the snug and charming spaces at the Holden Street Theatres. In this half an hour production, Casey Jay Andrews, both writer and performer, shares the true stories of four women and their battles with breast cancer; these women are all influential figures in Andrews’ life.

The intimacy, created by both the physical space and the way the stories are told, was overwhelming. The small audience of only six were seated in a crescent shape around Andrews, allowing her to offer every person eye contact and directed expression, having a remarkable effect on our emotional investment. The performance space was filled with homely treasures – pictures, trinkets, old toys, books – the floor covered with beautifully detailed rugs, and the seats were old sofa chairs that many of us associate with our grandparents’ houses. It felt like a feminine space. It was the perfect place to discuss the long lasting and wide spreading effects of cancer.

Andrews brought together a range of artefacts to tell these stories, with voice recordings from the real-life characters and pictures making for an intensely authentic experience. As the audio played, Andrews sat at a small table laying out pictures under a camera that projected her content onto a screen in front of us.

Between the personal stories and reflections, the audience learnt about the Educated Heart, a concept from Gelett Burgess’ book Have You an Educated Heart? Complimenting her personal stories with the ideals of an Educated Heart – kindness, instincts and relations to others – was a remarkable paring by Andrews, as it added a further layer of sentimentality, allowing us to understand the way we receive and process life’s challenges. Andrews herself opens up to us about her own heart, and inarticulate one.

Andrews’ writing is rich in imagery and delicate in tone, with her use of language allowing audiences to feel a deep connection to her and the experiences at the heart of this piece. In her delivery, Andrews presents a version of herself that reflects genuine kindness and vulnerability, yet great composure and comfort; in summary, her character and narrative voice is a flawless fit for this production.

The Archive of Educated Hearts brings us back to the humble art of storytelling, and the power of shared connection and human experiences, particularly those generated in times of grief. Expect the odd tear, a struck nerve or a lump in your throat. In this homely space listening to Andrews’ gentle recount, you will feel as if you have found the company of an old friend, someone you can sit with for hours and discuss life with a cup of tea in hand.

The Archive of Educated Hearts is showing at Holden Street Theatres until the 16th.

‘What does this all mean?’ I’d love to tell you, but I have no flaming idea.

Last Friday night, while everyone else was gearing up to hit the town, some friends and I found ourselves at Adelaide University’s Little Theatre, ready for a wholesome, thought-provoking theatrical experience to round off our week. The play on offer was Stephen Sewell’s Myth, Propaganda and Disaster in Nazi Germany and Contemporary America. Did it fulfil our hopes for the evening? Let me just say this: it was a lot to take in.

We followed the character of Talbot, played by Nick Fagan, an Australian man working at an Ivy League college in America as a Liberal Arts lecturer. The audience watches him go off his rocker as he falls victim to societal questions about terror, ignorance, and the line between patriotism and nationalism. First produced in 2003, this ‘drama in 30 scenes’ deals with the carnage left behind after September 11. Sewell is renowned for his award-winning work, with this baby being one of his big ones.

The director, Erik Strauts, expresses a strong connection with the idea that society should, but never does, learn from history – this production was an active choice to explore how this concept applies to our modern world. The discussion that this play raises remains timely; it’s been kept in the spotlight by Trump’s rise to power in recent years.

As far as the set was concerned, designer Brittany Daw managed to reflect the vibe of an exceptionally uncomfortable merge between Nazi Germany and contemporary America: the colour scheme was red and black, spotted with white and blue finishes. During scene changes, the audience’s eyes would be directed up to a projection of an imposing American flag. As the play progresses the flag takes on another dimension, subtly fading to make way for an imposing icon – so keep your eyes peeled!

From where I was sitting, there were some stand out performances. The first one that comes to mind is that of James Black, who plays Max, the Aussie best friend of our poor mad-man, Talbot. Until a sneaky twist at the end, Max served as much needed comic relief – he was the familiar Australian perspective, uttering the word ‘mate’ here and there to dilute the sea of everything American.

And then there were Stan and Jack. Jack and Stan. Jarrod Chave and Tim Edhouse were highly convincing in their roles as staff members at the college and had an appealing chemistry on stage. Chave and Edhouse’s accents were also consistent and well-established.

There was one character which, for the life of me, I could not entirely wrap my head around. If any of you figure him out, please, get in touch. Halfway through the second act we are introduced to ‘The Man’ – yes, all I can think of is the Killers song. ‘The Man’ proves to be exceedingly problematic for our protagonist. He appears to resemble someone out of the Matrix: the big black coat, the white gloves, the wrap around sunnies. A 2000s icon if there ever was one.

I’m going to say that this University of Adelaide Theatre Guild production is not for the light hearted or impatient. It’s saturated with swearing and soaked with political and philosophical lingo. 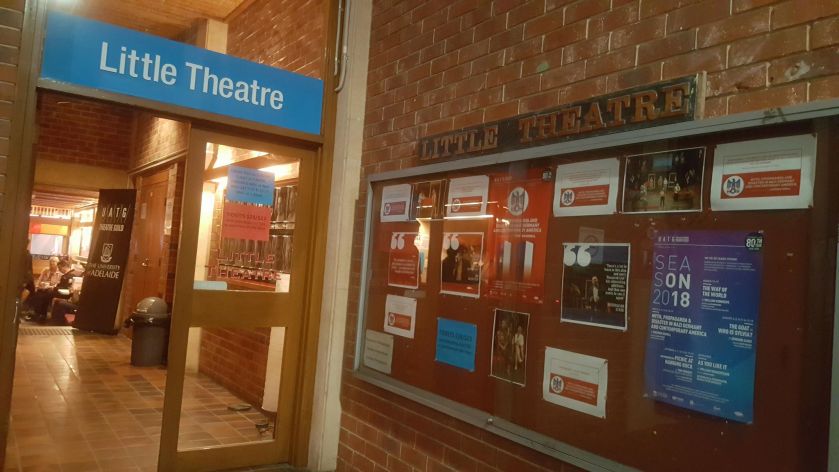 When you ask, ‘what am I in for?’ Well, it’s dense. It’s distressing. And it’s heavy in concept. It will challenge each and every one of its viewers. Without a doubt, it appeals to an elitist audience and, unfortunately, excludes the masses – in order to get the most out of this show, you need a thorough understanding of political and societal structures, as well as familiarity with influential writers and philosophers. Otherwise, you might find yourself in struggle-town. Perhaps this is a statement from the playwright about our ignorance. Or perhaps not.

In hindsight, I find it rather peculiar that I was sitting in the theatre at Adelaide Uni, watching a play, written by an Australian playwright, which picks apart the intricacies of the American dilemma. And within this play, Australia is spoken of as a ‘pretend country’ which really drills home how America seem to define us.

The movements of America – our so called ‘big brother’ – have become part of our everyday news headlines, absorbing our constant attention, and now occupying our theatrical spaces. Do we keep feeding the American ego by granting it all this attention? Or at the other end of the spectrum, are we becoming desensitised to the U. S. of A. because we are just hearing too damn much about it? Dare I say, we should now be looking a little closer to home, starting by centring our conversations around our own country. Because I would like to think that out nation is just as great, our issues just as urgent, and what we have to offer is equally as appealing.

Some things to think about between the many questions that will be left on your conscience after this doozy of a production.