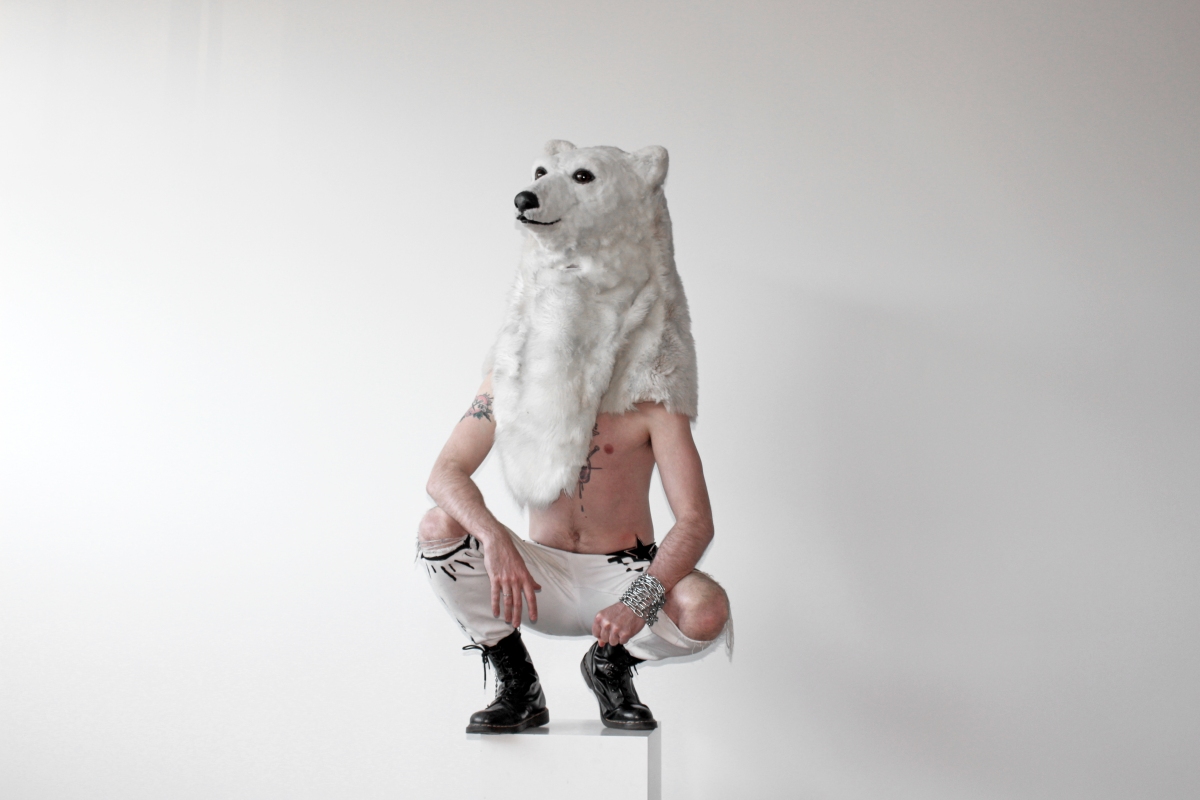 As you walk in, you’re handed an ice-cube from someone wearing a vaguely Day of the Dead-style suit, and no further instructions. There’s a low, bass-y, static-y rumble, and almost as soon as you’re in your seat – still holding the ice-cube – it’s demanded that the audience gets out of the stalls and assembles on the dance floor, where the two cast members launch into some heavy punk-rock. This is not a drill, one of them repeats. You’re still holding what’s left of the ice-cube. Yep, welcome to Fringe.

For me, this is the heart of Fringe; big-money stand-up acts in 200-plus seat arenas might pay the bills and keep the wine flowing, but for a festival initially started as a rebellious response to the original Adelaide Arts Festival becoming elitist and exclusionary, Fringe needs these sorts of shows to remain the Fringe. Avant-garde, highly experimental, stuff like Cold War gives street cred to the event. MKA, with Doppelgangster, have created a boldly unconventional production that discusses the current inaction on climate change. The two performers talk at each other in rapid-fire, touching on a million topics but always coming back to the same theme. Seemingly all absurdist and random, and with that constant white noise in the background, it all pivots back to an underlying question – can you win your innocence back? Can you right the ongoing wrongs? Each ‘act’ is punctuated by some original punk songs – one notable one claims Titanic was an inside job – and these effectively set up each act’s scenario.

Unfortunately though, there just seems like there’s a bit too much going on at any one time. The conversations between the two actors are peppered with off-hand references and sharp wit, but because they’re also tending to a drone or shaving ice & walking around the audience, you miss specifics and have to rely on just getting the gist of it. Key parts are usually slowed down a bit, but the sound mixing was clearly off, and as a result some of the song lyrics were hard to pick up as well. Whether it was intentional or not, it detracted from an otherwise interesting and engaging show.

Inasmuch as Cold War is clearly designed to be a confronting attempt to experiment with how a play ought to be staged, the lack of narrative and chaotic nature will rankle some people, which is a pity as the spectacle is well worth the effort required.

Cold War is showing until March 15

Published in 2016, The Midnight Watch is a historical fiction novel by David Dyer, a former London lawyer who now writes and teaches in Sydney.

The novel is set in 1912 and takes place during and after the sinking of the RMS Titanic. We all know of this infamous ship that sank to the bottom of the Atlantic Ocean after colliding with an iceberg. But not all of us know about the SS Californian: the closest ship to the Titanic while she was sinking, but failed to come to her assistance. If the Californian had come, many or perhaps all of the 1,500 people who died could have been saved.

Why didn’t the Californian come to Titanic’s assistance? This is what John Steadman, a fictional American journalist, endeavours to find out. It turns out that Herbert Stone, the Californian’s Third Officer, saw the Titanic firing distress rockets on the horizon from midnight onwards, and he wasn’t the only one. The Californian’s captain, Stanley Lord, was notified, but didn’t issue any orders until 5am the next morning, when it was too late (the Titanic sunk at 2:20am). Lord’s explanation as to why he didn’t go to Titanic’s rescue immediately changed over time, and Steadman finds that pages from the Californian’s log had been torn out. This motivates him to discover the truth, no matter what.

The novel is well-written and is historically accurate. It’s clear that Dyer heavily researched everything to do with the Titanic. In fact, he lifted quotes from original letters, witness statements, and inquiry testimonies, along with other primary documents, and used them in the novel’s dialogue. The story is told from multiple points of view, which I found jarring at first, but I quickly became accustomed to it.

The novel’s themes are easily identifiable. The main theme is perhaps truth versus point of view. The truth can easily be warped by people’s point of view. As Obi-Wan told Luke in Return of the Jedi: “Many of the truths we cling to depend greatly on our own point of view”. This is certainly evident in Stanley Lord’s case, as his version of events confused many but obviously made sense to him.

But being a former journalism student, the theme that stood out to me the most was miscommunication. Early press reports in the immediate aftermath of the Titanic’s sinking gave false information. For example, it was thought at one stage that the Titanic, heavily damaged from the iceberg, was being towed to the nearest port by another ship. This obviously wasn’t the case. But back in 1912, they could only communicate using Morse code on one wireless frequency, so it was easy for information to become jumbled. Steadman came across as an admirable journalist, as he goes to extreme lengths to uncover the truth.

Despite being set in 1912, all the characters are believable in the sense they’re relatable and realistic. They are written as human beings, not as stereotypical twentieth century people who come across as two dimensional. They all suffer grief, internal conflict, anger, confusion – the list goes on!

I thoroughly enjoyed The Midnight Watch, and would strongly recommend it, especially to other history buffs.

Creative, honest, and reliable, Callum J. Jones loves writing fiction and non-fiction. In his spare time, he likes to read, watch movies and TV shows, and going on walks.