How did you get involved with Tulpa Magazine?

I worked with Liam during my stint editing Empire Times in 2016 and really enjoyed working with him, and with Lisandra as part of Speakeasy Flinders, where I am vice-president. When they asked me to be a part of their new magazine I jumped at the chance to work once again with such brilliant creative minds. There’s nothing cooler than working with your friends, especially when your friends are actually talented and motivated enough to start their own publication. 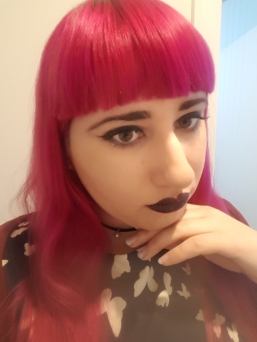 What do you do?

I write articles on politics, social issues, pop culture and the arts, as well as occasionally edit fiction pieces. My specialty topics are advice on how to make it in the arts industry and sexism in the publishing industry.

I’m a writer working on polishing up my first novel, a YA Sci Fi Romance about teenage superheros, whilst also picking up gigs in the festival scene. I recently started at Adelaide Festival where I will be assisting all our visiting and local authors for Adelaide Writers Week.

What has been the most rewarding part of working for Tulpa Magazine?

The most rewarding part of working with Tulpa is seeing my work publishing in such a clean and striking website. Everyone here is so committed to good journalism and great design that it’s a pleasure to share my work with them with the wider world.

What do you see yourself doing in the future? Where are you headed after Tulpa?

I’d love to kick off my career working full time in writers and arts festivals and conferences, helping to illuminate authors to a wider audience and really champion the arts as a worthy pillar of our society.

I’m also working on establishing my own writing career, creating novels that will speak to young (and the not so young) people and bring them characters that will stay with them throughout their lives.

How did you get involved with Tulpa Magazine?

When I first heard about Tulpa I was intrigued—an arts magazine not only based in SA but also focusing on South Australian artists and writers? Knowing that Liam and Lisandra had created it encouraged me to be involved. Having worked with both editors previously I know that Tulpa Magazine has the potential to grow and flourish. When the opportunity arose for a third managing editor to join the team I put my hand up, and, somehow managed to get in. Watching its development so far has been amazing and having this opportunity to shape its future is a privilege.

I think that it is important for Adelaide to have more arts projects running because we have such a large and vibrant arts community which isn’t always acknowledged. We might not be Melbourne or Sydney but that shouldn’t stop us from being Adelaide and cherishing our community and culture. Tulpa is all about supporting local artists and I am behind this aim entirely.

What do you do?

As a writer my main focus has been reviewing and criticism for both prose and theatre. I have been involved in reviewing long before I came to Tulpa and enjoy going to shows and events and providing my own take on the fantastic talent around Adelaide. Moving forward as an editor with Tulpa I will be managing a new section of the magazine where we will be discussing all things books—focusing, of course, on local authors.

Outside of Tulpa I am both boring and busy. I spend half my life working a generic retail job which a.) pays me, and b.) allows me time to switch my brain off all things writing. The other half is a mixture of writing, reading, and babysitting my nine nieces and nephews. Just last year I completed my BCA honours in Creative Writing at Flinders University where I focused on hope within dystopian stories. I’m now in the beginning stages of writing a historic fiction piece set in 1916 Australia because I am entirely fascinated by the implications of the Great War for those at home. I also love watching slam poetry and have been known to fly interstate just to see Button Poetry poets on their world tours.

What has been the most rewarding part of working for Tulpa Magazine?

The most rewarding part of working for Tulpa has been watching it grow from an idea into an active project. I am looking forward to the day we receive funding which means not only will we PAY THE ARTISTS, but the plan for a print magazine will be set in motion. There are of course other aspects which I really enjoy such as the events we organise to review and the wonderful feeling of getting to read someone else’s work pre-publication and providing (hopefully) helpful feedback.

What do you see yourself doing in the future? Where are you headed after Tulpa?

In the future I assume I’ll be writing and reviewing, hopefully for places that pay me and, ideally, fly me all over the world. A girl can dream right? Regardless, I’ll still be writing, I’ll still be reviewing. I would love to be working in the arts, potentially even with the Fringe festival so that I can continue to support local artists as well as work with more established ones.